As a student of psychology, it has become a hobby of mine to read up on obscure hate groups and serial killers.  Both offer a glimpse into very polar, yet, equally abnormal personality types.  The serial killer, almost exclusively seeks his prey alone, while organized hate groups take advantage of marginalized youth.  A serial killer’s directive, will power and restraint come from within.  A hate group’s power relies on compliance and an illusion of power in the hands of the otherwise powerless.  The stereotype of most white supremacists is that they are none-to-bright.  Not many in possession of an I.Q. containing three digits would purposefully seek out an organization with such flawed logic.  However, creating and maintaining a hierarchy over long periods of time, planning and recruiting require intellect and insight, that if paired with the right predilections, can be the spark that ignites a movement.  Contemporary groups tend to have one or two clever demagogues, who initially rely on a soft form of bigotry, sweetened with the lure of ancient avant-garde religious practices, misogynistic men’s rights ideologies and a brotherhood most could not find in the wider world.  The Wolves of Vinland are one such group.

On the face of it, The Wolves, seem like a silly group of men who have watched Fight Club one too many times.  There’s a lot of disappointing irony in that assumption.  We’ll get to that in part 2.  Their collective, which The Southern Poverty Law Center, considers a hate group has tentacles in Virginia, Wyoming, Indiana and Colorado of all places.  From what I can gather, their Lynchburg, VA chapter seems to be the spearhead.  The Wolves of Vinland appear to be unincorporated, woven loosely together by similar ideas and rituals. However, nothing could be further from the truth. This image is a ruse, much like the the Neo-Odinism the group uses as a thin veil to hide their true nature.  They were, “founded”, so to speak, by two brothers, Paul and Matthias Waggener, sometime in the early 2000’s.  From what I can ascertain their activities began benignly enough as an occasional boy’s retreat in the surrounding National Forrests of Virginia.

The open boil that fully exposed the nature of The Wolves goes by the nickname Hjalti but his real name is Maurice Thompson Michaely of Haymarket, VA.  According to this (pg. 2) January 23, 2013 ATF news release Michaely was charged with the arson of Mount Pleasant Baptist Church.  Mount Pleasant is a predominantly African American church whose building was erected in 1877.  The ATF, left the “p” out of Michaely’s middle name.  It’s the federal government, are you surprised?  Here’s a corroborating news article where the name is correctly spelled.  Below is the court information directly from Prince William County. That too, contains misspellings, though his name is spelled correctly four out of six times in this instance.

Obviously, Paul Waggener, The Wolves co-founder, was none to pleased with his fellow Nazi’s incarceration. 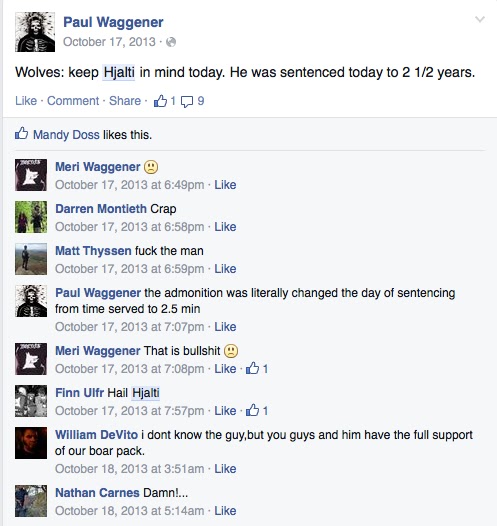 Here’s Paul giving a through the glass, man pound to “Hjalti” .

After 2 1/2 years on the inside, thanks to a plea deal, Maurice Thompson Michaely was freed and is seen here in a September 27th, 2015  Ulfheim Facebook  post, assisting in the erection of The Wolves’s new hall.

Paradoxically, their Facebook page lists the group as a Religious Organization.  Ironically, their current cover image is of a structure burning to the ground.

In Michaely, we have an individual who burned down one communities’ church only to go on to build his own upon release.  It is apparent that Michaely acted as a proxy for The Wolves of Vinland and it’s remarkable the entire organization has not been prosecuted under the RICO act.  Tellingly, the Wolves’ new hall was almost entirely funded by Counter Currents, a white supremacist publishing outfit.  Their two newest titles, as of the writing of this piece, are Truth, Justice & a Nice White Country and The Color of Crime.  The cost of the new hall?  $3,000.  In my opinion, that money should go right into the pockets of Mount Pleasant Baptist Church.  In fact, if Mt. Pleasant wanted, they might, through civil action, have a chance of stripping the group of the entirety of its holdings, like Beulah Mae Donald did to the United Klans in 1987 following the 1981 lynching of her nineteen year old son.